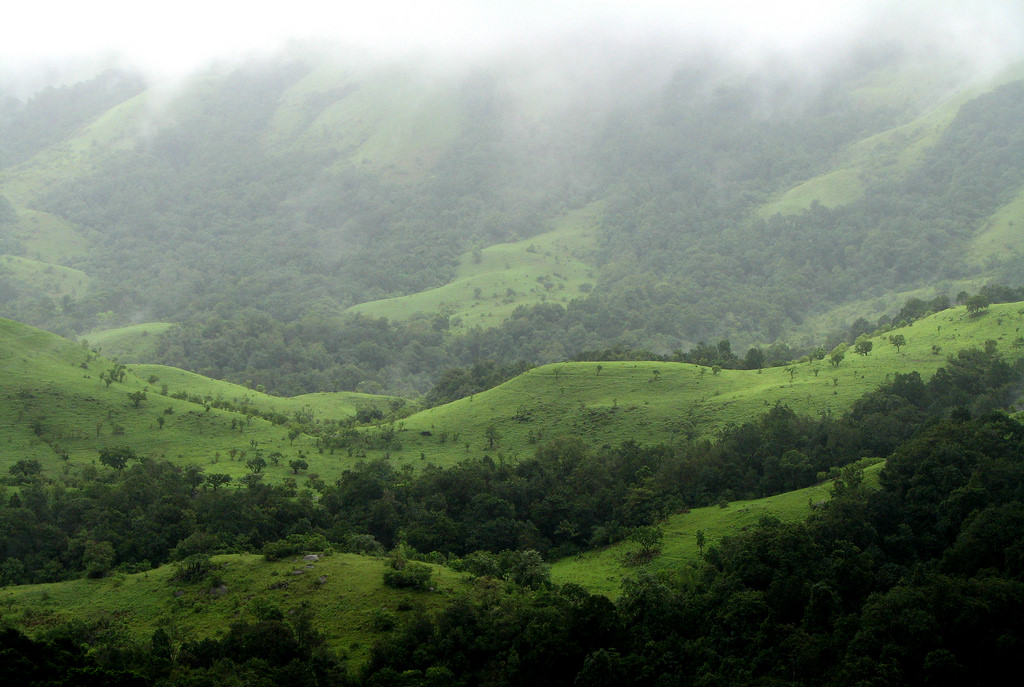 The cool, crisp air of the hills beckons as you drive up the majestic rocky slopes of Kodaikanal. Steep and winding, the views get increasingly spectacular with the gradual rise in altitude. We have traveled far and wide but still come up short in finding a paradise as wild as Kodai, putting the premier hill station in a league of its own.

This age old Imperial holiday choice is currently among the top ten destinations for trekking in south India. From among valleys that are shrouded in mist all day long is unveiled the delicate grasslands of Shola, merely one of the many rich and beautiful ecosystems in the prolific sub-continent of India.

One loses hours just gazing at the hilly vistas of Kodai; among the lush forested valleys and cliffs, you will notice certain rounded hilltops that look rather bald in the dry summers or a brilliantly radiant green in the monsoon. These seemingly bare and naked patches are grassland hilltops, forming a part of one of India’s most crucial ecosystems.

Scientists are still out on the precise origin of the Shola ecosystem, a highly debated subject on which researchers are yet to reach firm conclusions. Thriving within the tropics, the Sholas are found at high altitudes (beyond 1500 meters above mean sea level) and as part of the biodiversity hotspot of the Western Ghats, they naturally support a host of endemic flora and fauna.

Essentially, the Shola complex is a mosaic of dense valleys of montane evergreen separated from one another by extensive grassland; this is a gloriously unique combination of greens from which unforgettable views are born.

The Shola grassland complex falls under classification of southern wet temperate forests and can also be found in Palakkad, Wayanad, Idukki, Thiruvananthapuram and Agasthyakoodam in Kerala; the Nilgiris and Palani hill ranges in Tamil Nadu and Kudremukh, Sharavathi Valley, Chikmanglur and associated regions in Karnataka.

Where the clouds are your constant companion…

This ecosystem is a part of the broader class of ‘tropical montane forests’ that exist in three sub-categories in India – montane wet temperate, Himalayan moist temperate and Himalayan dry temperate forest types. Alternatively, the Sholas are also categorized as ‘tropical montane cloud forests’ or just ‘cloud forests’, a type of forest defined by a primary feature i.e., the persistent presence of cloud cover.

True to this definition, when you spend a luxurious few days just trekking the Palani Range of hills (on whose fringes Kodai is poised), the clouds are a constant companion, collecting in the hollow of deep valleys every few minutes only to fall in magnificent rain soon after. By virtue of its high altitude, the Shola hilltops eternally kiss the clouds and so manage to capture a substantial amount of moisture from them. This distinguishes them as cloud forests.

An endless range of grass meadows

Shola trees display stunted growth owing to the severe wind action of the peaks, their foliage sports a variety of colors, brushed with blazing oranges and maroons that fire up the dark green canopy. Collectively though, the Sholas appear as an endless range of grass meadows on hill ridges and tops, easily one of the most gentle and pleasing avatars Mother Nature quietly slips into.

The immense endemicity of fauna in the Shola grasslands can be attributed to their isolation, altitude and evergreen nature. Tigers, leopards, sambhar deer, porcupines, muntjak, bison and elephants are among the many mammals found here. Though disappearing, the Sholas are the primary natural habitat for the Nilgiri Tahr (given the prestigious title of state animal of Tamil Nadu) that has emerged as a flagship species to save its grassland home. It is because of the decades of tireless conservation efforts spent toward preserving this rare and endangered goat-antelope that the grassland ecosystem of Sholas has finally been put on priority for conservation.

These quiet meadows liven with birdsong from hundreds of unique avian species – laughing thrushes, bulbuls, martins, shortwings, flycatchers, bee eaters, babblers, birds of prey and many more, several of which thrive only in Shola grassland – a lost paradise for birders.

Floristically In terms of flora, dwarf trees growing up to 30 feet exist along with closed canopy. Dense shrub fills the space between the upper storey and under storey making up the Shola forest. Velvet layers of moss and lichen also thrive amidst the high moisture; hard, woody creepers entwine the forests’ trees as beautiful orchids show themselves on occasion. One of the most interesting floras encountered in the Sholas is the amazingly gigantic species of fern that can be seen in the narrow transition to grasslands. Finally, the grasslands themselves are a truly stunning sight.

It is a well known fact that the Western Ghats are one of India’s largest watersheds and receives some of the heaviest rainfall on planet earth; that said, the role that the Sholas play in sustaining water cycles is crucial. An important feature being that they act like natural sponges, able to retain more than half the rainwater received from the monsoon. This water is then gradually released through a large network of streams and rivers whose very existence is thanks to the grasslands themselves.

This intricate network of freshwater goes on to enable a hundred thousand lives downstream, and across southern India. You will be surprised to know that several rivers originate in Sholas – among these are Tungabhadra, Nethravati and Kaveri (Cauvery). The Sholas also function as thermostats, keeping annual minimum and maximum temperatures at a constant average of 15C-20C, even at the peak of the driest summer.

Regardless of their ecological imperative, the Sholas are one of the most neglected ecosystems we have come across. Its degenerative story began back when the British were busy acquiring ghats as hot new summer getaways, converting native forest to commercially viable private estates of coffee and tea or mining them beyond repair. It was from then on that south India’s fragile natural heritage was doomed.

This rare and unique grassland ecosystem was overlooked, mistakenly perceived as wasteland, causing the greedy colonials to go on a rampage converting Sholas to mono-cultured land where cash crops such as eucalyptus became prime money makers. To this day, you will find eucalyptus, pine, acacia, wattle and other such exotics invading the flora of Western Ghat hills, a stark reminder of our imperialistic past.

As a precious source of many streams and rivers, the Shola biome must be conserved in order for us, along with hundreds of other organisms, to survive. Further, it is an extremely sensitive type of forest that is directly affected by climate change and is especially difficult to reconstruct once fragmented.

Time to preserve an authentic portrait of India’s landscapes

So far, we have already lost 80% of the historical range of the Sholas and continue to lose more at an alarming rate. Deforestation for the purpose of agriculture has heralded the end of the Sholas. This raises red flags, implying that we must act swiftly so as to preserve an authentic portrait of India’s landscapes. For if we do not, our children will not have the chance of learning life-giving lessons from the gentle heart of the Sholas we have grown to love so dearly.