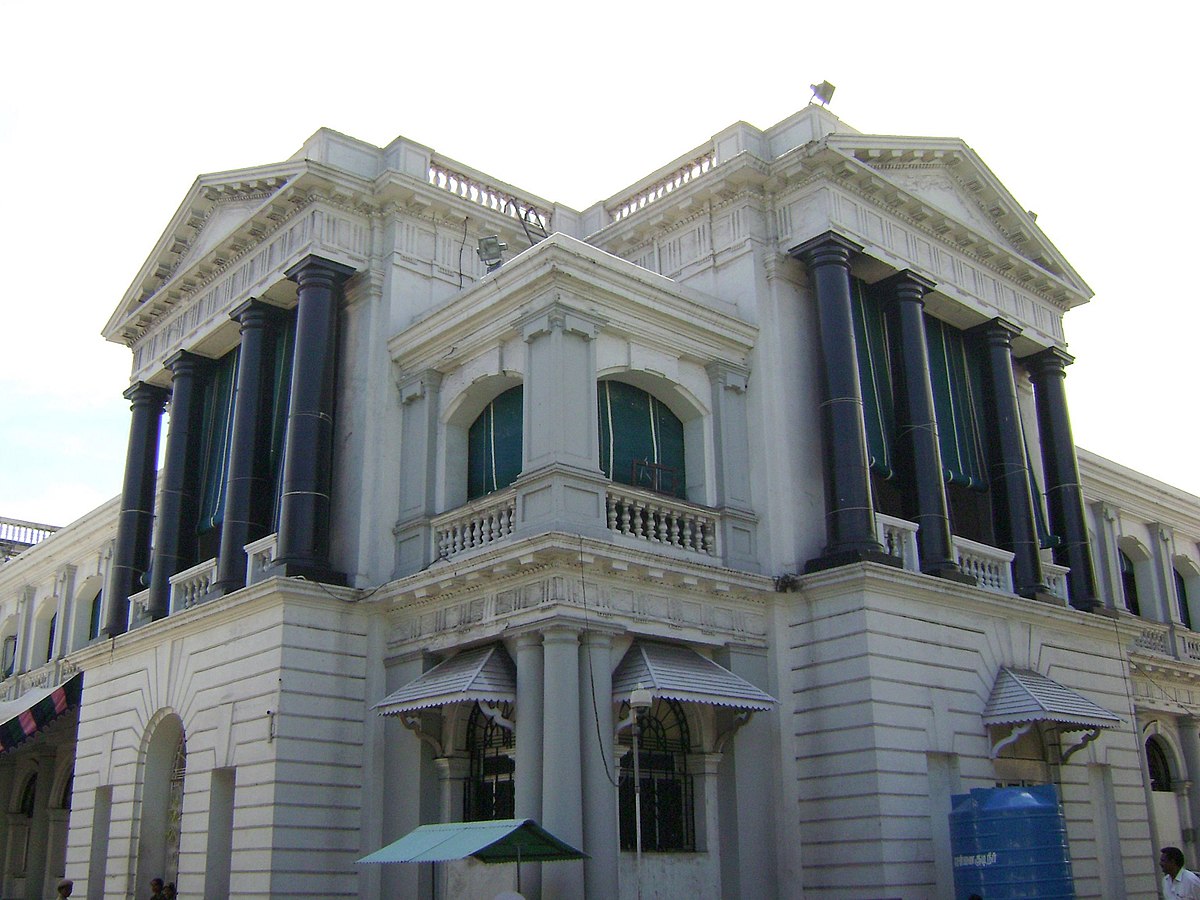 Tamil Nadu boasts of many forts dating back to the 17th and 18th centuries. While a few are in ruins, many of these forts are still functional today and form part of the prominent attractions to tourists visiting the state.

The very first fort to be built by the British in India in 1644, Fort St. George stands in Chennai. Today it is the administrative office of the legislative assembly of Tamil Nadu.

The fort in Vellore was the headquarters of the Vijaynagar Empire and was built in the 16th century on the Palor river bank. The fort has the combined presence of a temple, mosque and church among other buildings. It exudes the finest military architectural styles of Southern India with its remarkable moat, ramparts and masonry.

Built by the Marathas in the 17th century, the Manora Fort overlooking the Bay of Bengal has eight stories and a hexagonal tower. Damaged in the Tsunami, it was restored in 2007 with additions like a children’s park also made.

Built by the Nayaks and the Maratha Rulers, this majestic fort houses the Thanjavur Palace. It also has the SangeethaMahal, Library, an art gallery with several sculptors and paintings and the Shiva Ganga gardens in its complex.

Originally built by the Cholas, the Gingee Fort was modified during the Vijayanagarreign and then became the headquarters of the GingeeNayaks when they were dominant in Tamil Nadu. The fort also served the Marathas during Shivaji’s regime. The fort is an impressive structure at a height of 800 feet and with an 80 feet wide moat surrounding it. The granaries, Chenjiamman Temple and prison cells it houses are worthy of many visits.

A 17th century fort, Udaygiri Fort was modified by the Travancore rulers in the 18th century. It is now converted into a bio-diversity park. The major attractions are the tombs of the Dutch admiral De Lennoy and a magnificent chapel built in his memory.

Erected by the seaside, this fort belonged to the Travancore kingdom but built by the Dutch for them. Meaning circular fort, the Vattakotai Fort presents the views of the sea on one side and the Western Ghats on the other and is a popular tourist spot.

The Dindigul Fort or DindigulMalai Kota was built by Madurai Nayak in the 17th century. It was passed down to the Mysore Wodeyars and gained considerable importance during the rule of Hyder Ali and Tipu Sultan. It was then used by the British during the Polygar Wars. Now it has an abandoned temple on top and a few cannons.

Acting as the base of the Danish settlement, Fort Dansborg or Danish Fort as it is called by locals was sold to the British in 1845. The fort is now an important tourist destination with a museum displaying artefacts of the Danish Empire.

This massive fort is 40 acre wide and was constructed by the Raja of Ramnad in the 17th century. The fort was a ring fort with seven concentric walls of which only four have survived. With three entrances, the fort has shrines of Hanuman, Ganesha and Karuppar on the south and Bhairava on the north. Cannons, a natural pond and two rock cut temples are among the many attractions the fort beholds.

Built on a 272 feet high rock that could possibly be over a billion years old is the Rock Fort in Trichy. The fort has witnessed many battles and was prominently used by the British in the Carnatic Wars. It has two temples within its premises; the UcchiPillayar temple and Thayumanaswami temple. The Rock Fort is a landmark monument of Trichy.

Built around 50 kilometres from Mamallapuram, the ruins of the Alamparai Fort can be seen in the village of Kadapakkam. The fort overlooks the sea and was built during the Mughal period. It is said to have had a 100-metre dockyard and commodities like silk cloth, ghee and salt were exported. The fort was gifted to the French and then conquered by the British.

Also called BakasuraMalai, the Droog Fort is a historic monument built by Tipu Sultan and used as an outpost. It can be reached with a hike through the Nonsuch Tea Estate. 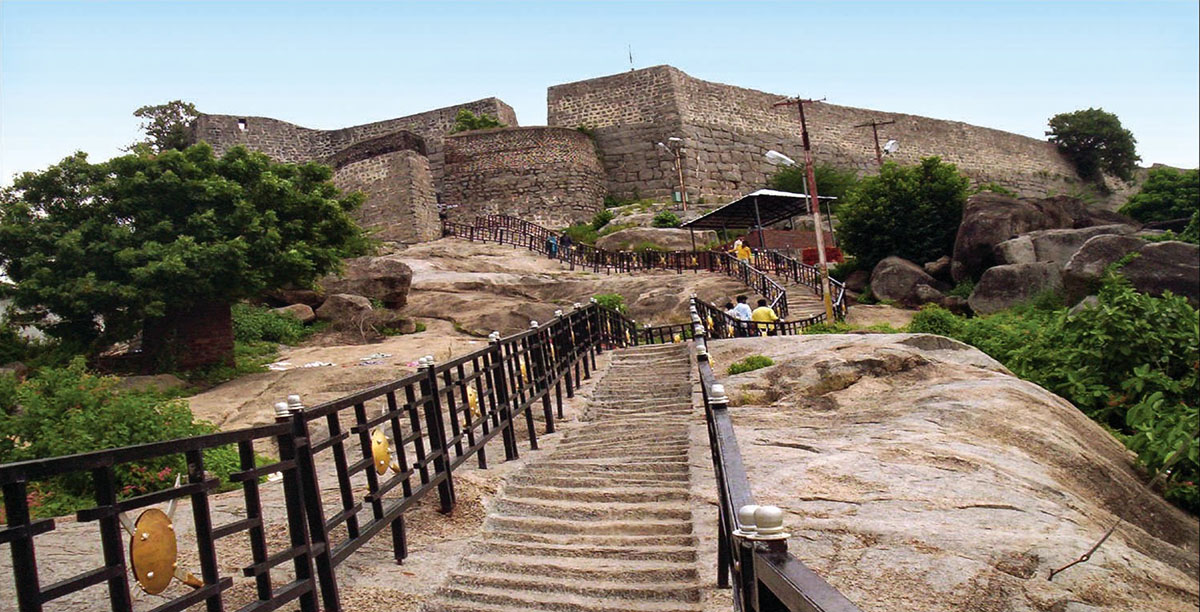 The present state of Telangana was an important trading centre especially for spice. With plenty of trading regions along the coast, foreign clientele was huge resulting in battles for ownership. Consequently many forts were built to mark territories and claim power. Today these forts serve as an important tourist attraction with their historic significance and beauty. Some of the forts of Telangana are:

Started by the Kakatiya rulers in 950 AD, the Khammam Fort was completed by Velama Kings and MasunuriNayaks. Additions to the fort were made in 1951 by the QutubShahis. Displaying a mix of both Hindu and Muslim style of architecture, this 1000 year fort is a wonderful place to explore today.

Built by the Kakatiya rulers to protect their city from invasion, it was the command post for them and later for the QutubShahis. Housing a cannon, mosque and granaries the fort also provides a view of the entire town from the top.

Containing 21 structures, the construction of this fort began in the 14th century. Most places of the fort are in ruins but tourists visiting it get an insight to the marvellous architectural style. The fort is in a picturesque terrain and offers opportunities for treks. Temples of Kathulabave and Gopinatha are also close by.

Regarded as the finest example of South Indian architecture, the Warangal Fort has four large gateways; the front one being the largest of its kind in India. Though the fort is in ruins, the intricate designs of animals and birds on stone continue to attract a steady stream of visitors.

Referred to as the ‘Grand Canyon of India’ Gandikota Fort got its name from ‘gandi’ meaning gorge and ‘kota’ meaning fort. The fort is built on a gorge between the Erramala range of hills and the River Pennar flowing at the foot. The breath-taking setting of the gorge with the backdrop of the fort with its temples and mosque is a treat a level higher than Arizona’s Grand Canyon.

With an interesting history that speaks of treachery and curses, the Rachakonda Fort is vastly in ruins today but continues to attract tourists and local explorers. Another fort in this area is the Bhongir Fort built on an isolated monolithic rock by a Chalukya ruler.

Ruled by five dynasties, the Eldangal Fort stands on the banks of the Manair River which is a tributary of Godavari. The fort contains tombs of many Muslim saints. A unique feature of the fort is the minarets which oscillate when shaken.

One of the prominent forts of the Kakatiya dynasty, the fort astounds with its excellent pieces of sculpted art. The Lord Shiva temple in the fort complex is the main attraction.

Built by the QutubShahis to defend Mughal attacks, the Golconda Fort has many attractions for tourists. The acoustics feature that makes your voice echo and heard from a distance is as fascinating as the belief that a secret tunnel connects the fort with Charminar around ten kilometres away.