Palaces in Northern India are wonderful examples of the engineering and architectural marvels of our historical empires. You can see the royalty exuded in the palaces of Rajasthan and the grandeur of the ones built by our mighty Mughal Empire. Some of the most popular palaces are listed below:

Set on Chittar Hill, the UmaidBhawan Palace is the residence of the royal Jodhpur family and the sixth largest private residence in the world. Constructed with palm court marble like Agra’s Taj Mahal, the palace looks over the Blue City of Jodhpur with its enormous sand dunes and majestic Mehrangarh Fort. Surrounded by well-maintained lush gardens that are spread over 26 acres, the property also houses the five-star Taj Palace Hotel and a museum.

Constructed as a summer palace the Lake Palace is on Jagniwas Island on Lake Pichola, Udaipur. It was built during the rule of Maharaja Jagat Singh II. The style of architecture and the designs of the palace are eye catching with its black and white marble floors and arabesque walls. The palace is now run by the luxurious Taj Hotels and Resorts Palaces and is voted to be one of the most romantic palaces of India.

Built for the British Viceroy when the capital of India was shifted from Calcutta to Delhi, the Presidential Palace is now the official home of the President of India. The palace is built in a palatial area that includes the Mughal Gardens, staff quarters, large open spaces, stables and offices and is the largest residence of a head of a country in the world in terms of area.

Popular for its marble structure, the Marble Palace is situated in North Kolkata. It was built by Raja Rajendra Mullick and houses paintings, sculptors and many valuable pieces. A zoo stands next to the palace.

Modelled on the Buckingham Palace in London, the Cooch Behar Palace was built during the rule of Maharaja Nripendra Narayan. It is built in a classic western style and is a double storeyed brick structure oozing classiness and opulence.

Housed inside the Agra Fort, the Jahangiri Mahal was built by Emperor Akbar primarily for the women of the royal household. The palace shows a mix of Hindu and central Asian architecture. The other attractions that speak of the high taste of the Mughals are the Khas Mahal, Deewan-e-Khas, Moti Masjid, Deewan-i-Am and Anguri Bagh.

Located in Agartala, the Ujjayanta Palace was constructed by the Tripura King Maharaja Radha Kishore Manikya. It is built on the banks of a small lake and is surrounded by beautiful Mughal Gardens. The palace is now a museum of the state and displays the art, culture, tradition and crafts of the northeast Indian communities.

One among of the most beautiful, grand and palatial palaces of India, the Jai Vilas Palace stands in the city of Gwalior. Built by Maharaja Jayaji Rao Scindia, the palace is the current residence of the royal Maratha Scindia family.

Also called Lakshmivilas Palace, the AnandBagh Bihar Palace is located in Darbhanga town in Bihar. It was built by Maharaja Lakshmeshwar Singh. It is popular for its gardens that grow rare species of plants like orchids, Rudrakhsa and Sandalwood.

Built by a Dogra King, the Amar Mahal Palace is in Jammu. It is in a very scenic location on the banks of the River Tawi offering spectacular views of the magnificent Sivalik Hills. Now a museum, the palace is believed to be the last royal residence of the Dogra Rajas or Suryavanshi Rajputs.

Built by a Dogra King, the Amar Mahal Palace is in Jammu. It is in a very scenic location on the banks of the River Tawi offering spectacular views of the magnificent Sivalik Hills. Now a museum, the palace is believed to be the last royal residence of the Dogra Rajas or Suryavanshi Rajputs.

Set on the western banks of River Imphal, the Kangla Palace stands at Kangla in Manipur. It was built by Meitei kings and is in the centre of the city. It is now a religious place of worship and ceremonies.

Also known as Maharaja Palace, the Laxmi Vilas Palace is in Vadodara. It was built by the Gaekwad dynasty and has an impressive architecture. It is now a museum and also used as a venue for musical concerts and cultural events.

Sashti Viratham is a discipline observed throughout Tamil Nadu, Kerala and some places of Karnataka, Andhra Pradesh and in other countries such as Malaysia, Singapore and Sri Lanka. Sashti means six; vratham is a vow or rigorous discipline that includes fasting and observation of certain traditional practices. This festival is in honour of Lord Muruga or Subrahmanya, the son of Lord Shiva and Goddess Parvathi and younger brother of Lord Ganesha.

The Tirunchendur Temple of Lord Muruga, the patron God of Tamizh, is in Tamil Nadu and attracts the largest number of Kanda/Muruga/Subrahmanya devotees during this festival. The festival marks the six day war that was waged between Muruga and Soorapadman. Muruga is empowered by all the Gods to kill the demon Soorapadman, the evil demon. He is given a special weapon, the Vel or spear, by his mother Goddess Parvathi.

Kandan’s Thiruvilaiyaadal (divine sport) against Sooran is enacted on the sixth day of the festival as Soora Samharam, the annihilation of the demon. After the demon is destroyed, he is given the dual honour of becoming the Lord’s vehicle as mayilvahanam, the peacock and the Sevalkodi (the rooster) on Muruga’s flag.

On the final day Kanda’s victory is celebrated with his wedding to Devayani, the daughter of Indra, the King of the gods.

Deep into the Caves of Andhra Pradesh 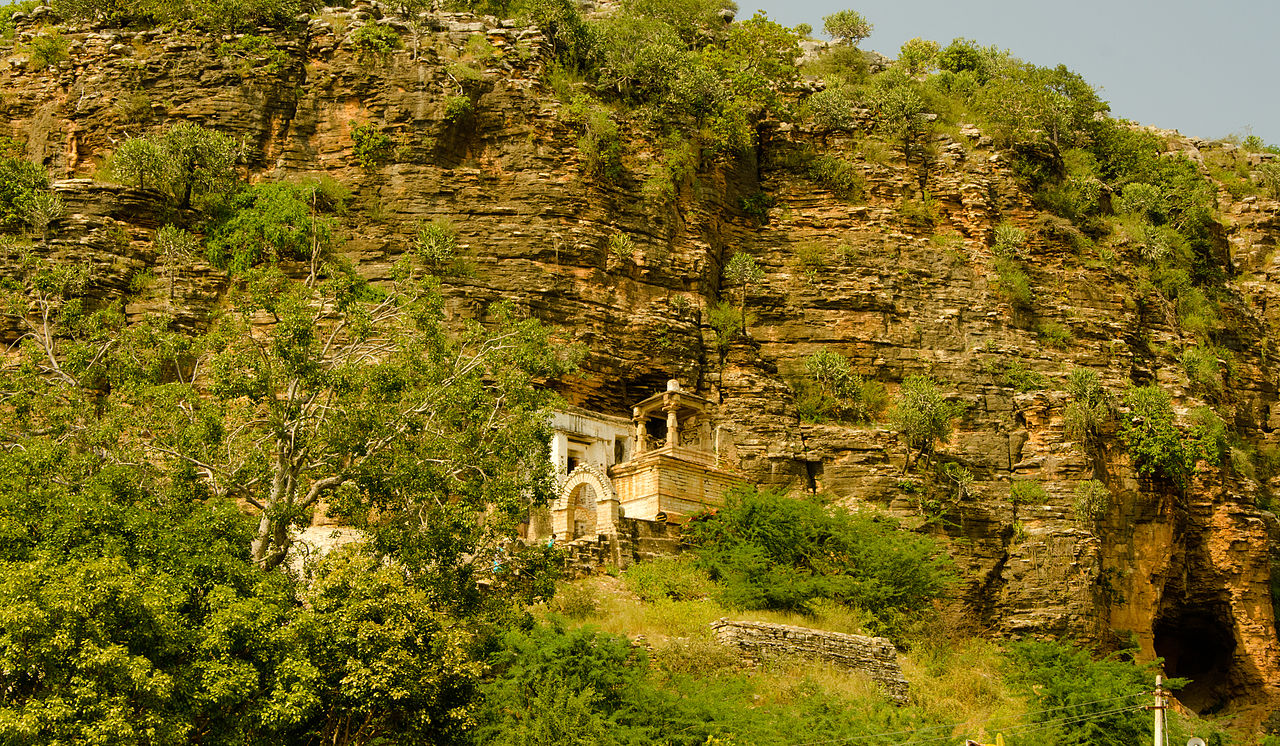 Ever since he had studied about caves in his higher secondary, Roshan had his interest in caves fanned. Now studying in a college in Hyderabad, he convinced four of his friends to join him on an exploration of caves in Andhra Pradesh during their vacation. Andhra Pradesh is geographically inclined towards caves. Formed over centuries, these natural formations are spread all over AP.

The five friends first visited Yaganti Caves in Kurnool district. This natural cave encompasses several other caves like Sanka Cave, Rokalla Cave, Veera Brahman Cave and Venkateshwara Cave. The famous Kalagnanam by Potuluri Veera Brahmam was written in the Yaganti Caves. With so many deities present, the Yaganti Caves has become a popular pilgrimage site. The surrounding scenery and lovely landscape adds to the divine feeling.

Close by in the same Kurnool district, was the famous Belum Caves, so that figured next on their list. Belum caves holds the number one position for the largest and longest cave in India. The roomy chambers, lengthy passages and fresh water pockets in the caves make it a popular tourist destination.

Next cave on their check-listwas Undavalli Caves in Guntur district. These monolithic caves are rock-cut and belong to the 4th century. The caves house four stories. A wonder of the cave is the magnificent reclining statue of Lord Vishnu sculpted from a single granite block. The other shrines to be seen in Undavalli Caves are of Trimurti, Shiva and Brahma. The friends enjoyed the views of the Krishna River and the vast expanse of picturesque landscape around the caves.

Their next headed to nearby Vijayawada for the Mogalarajapuram Caves. It is popular for three cave temples dating back to the 5th century. The friends discovered that only one of the three temples inside the cave was in fairly good condition. The deities found here were of Nataraja and Vinayaka. They were impressed by the architecture of the temples.

The five friends had reserved the best cave for the last visit. Located around 90 kilometres from the port city of Vishakapatnam, the Borra Caves stretch over the Eastern Ghats. These caves are the second largest natural caves in India and occupy about two square kilometres. They are located high up at a height of 1400 feet. What the friends liked best about the Borra Caves was that they were naturally formed limestone caves out of deposits of the Gosthani River. This river when flowing through the solidified stalagmites and stalactites in the caves caused many structures of shapes which resemble idols, things or any other subject. The friends had an amusing time interpreting the shapes as temple, church, Shiva, Parvathi, human brain, crocodile and whatever their wild imaginations let them.

Having completed their ‘cave trip’ satisfactorily the five friends returned to their respective homes to spend what was left of their vacations.