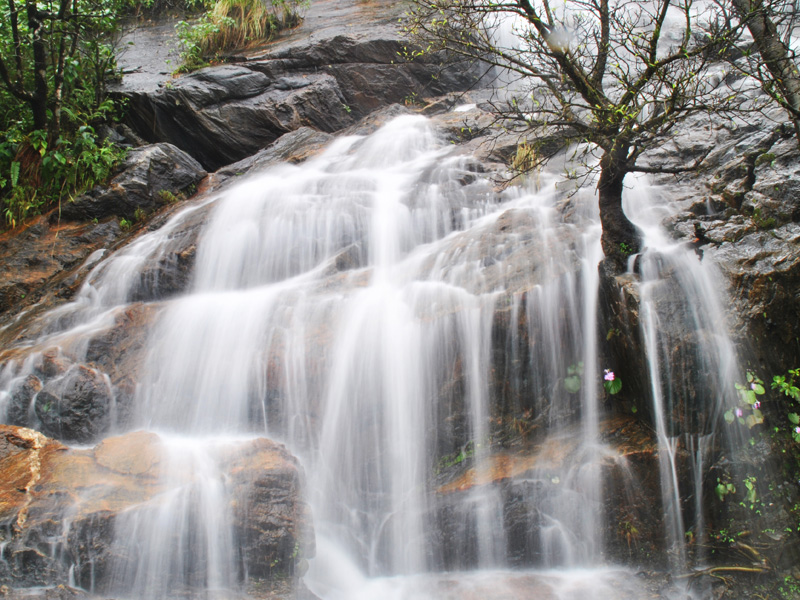 The Western Ghats, a UNESCO World Heritage Site & one of the eight “hottest hot-spots” of biological diversity in the world is itself a major attraction in India along with its high hills, deep valleys, mountain grasslands, dense & rain forest. The mountain range form one of the four watersheds of India, feeding the perennial rivers of India. During the monsoon season these rivers offers some of the spectacular waterfalls that are still hidden in the dense Forest. Listed are below the 10 unexplored waterfalls in Karnataka though not ranked in order.

Sirimane Falls, is among the many waterfalls that the state is endowed with. Though it is not a very high fall, Sirimane Falls is beautiful. Sirimane Falls, originates as a tributary of Tunga River which descends from the Western Ghats, descending as a waterfall. The waterfall lies near Sringeri in Chikmagalur District of Karnataka.

Benne Hole Falls can easily be called one of the most beautiful waterfalls in Uttara Kannada, Karnataka. In Kannada, ‘benne’ means butter and ‘hole’ (pronounced holay) means ‘big stream’ and that is a perfect description of the churning, creamy waterfalls that are so beautiful to behold.

Bandaje Arbi Waterfalls, one of the most breathtaking falls in the Western Ghats, is located near Mundaaje, in Dakshina Kannada District of Karnataka.

Burude Falls, also known as Dodmane Falls, is near Kyadgi in Uttara Kannada. The way to reach this five-step waterfall is to descend through a small creek, which is dry in summer, to the river. However, this creek is full of water in the rainy and winter months and makes it impossible to enter the area surrounding the waterfall and the valley.

Arasina Makki Falls (also called Arisina Gundi Falls) is a spectacular waterfall located deep inside the Mookambika Wildlife Sanctuary in Karnataka. To reach this amazing place you will need to trek 1-2 km deep inside the forest of Kodachadri Hills.Sauparnika River takes a leap from a height of about 50 mts into a naturally created pond to form this beautiful waterfall.

Alekhan Waterfalls is around 18 kms from Charmadi Ghats in Chikamagalur Hegadekatta, Karnataka. This waterfall can be easily found as it is just next to a small bus stop by the name of Alekhan Horatti. To see the falls, you have to follow a narrow path going down just next to the board which mentions a bridge. While Alekhan Waterfalls are completely visible, one can also descend a few meters to reach the base of the falls.

Unchalli Waterfalls in Uttara Kannada, Karnataka is also known as Lushington Falls created by Aghanashini River as it tumbles down from a height of 116 meters. Situated amidst the hilly ranges, Unchalli Falls is 5 kms away from a hamlet, Heggarne. The main station, Siddapur is 35 km away. From here you can take local transport to reach this exquisite place. Buses stop at Heggarne from where you can reach the falls 5 km away, trekking through a thick forest.

Achakanya Falls is one of the hidden waterfalls formed near Thirthahalli. The fall is located at a distance of 10 kms from Thirthahalli on the way to Hosanagara in Shimoga District in Karnataka.

Vibhooti Waterfalls is in Uttara Kannada district along the banks of the Gangavali River. This picturesque falls lies between Sirsi, Yellapura and Ankola. Also spelt as Vibhooti Falls, it is 50 kms from Sirsi in North Kanara district and is around 8 kms away from Yana.